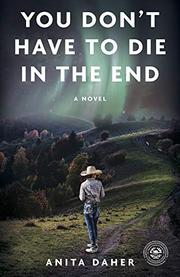 Eugenia Grimm is 16 and a high school dropout. Her depressed father died by suicide when she was 8, her mother walked out when she was 14, and she lives with her eldest brother, Darcy, and his young family. Her other brother, Jackson, is an alcoholic ne’er-do-well. Unfortunately, Eugenia seems to be following in his footsteps. After a young woman spits on Eugenia’s best friend, Luda, and Eugenia attacks her, she is given the chance to attend an alternative program on a ranch rather than being incarcerated. Eugenia has to learn how to work with the wild horses as well as attend therapy sessions. Trust, respect for others (both human and equine), and cooperation with staff come hard as the teens struggle with their individual issues. All are scarred—by fear, mental health issues, and abandonment—but are working toward their visions of a better life. A few hints at heterosexual romance, disappointment in Luda’s friendship, and some dangerous moments with a horse round out the action, but this first-person narrative tells too much and shows too little. Eugenia experiences significant emotional turnaround in an unrealistically short time, and she and other characters never fully come to life. The characters present white except for Indigenous ranch guide Hayden, who is Nisga’a; Luda is queer and nonbinary.

THE ELEPHANT THAT ATE THE NIGHT